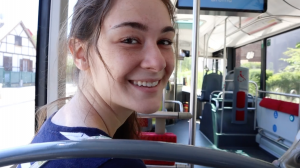 I knew two years ago that I would be in France this summer. So, I traveled from the east coast of the United States to the west coast to prepare for it. Did I forget to mention that I only used public transport?

After using public transport in 5 states and 3 countries, I felt like an expert. I got on the tram in Strasbourg for the first time and thought “this is so easy, nothing like New York!” I can’t help but compare French public transportation to New York, Los Angeles, or even London. You see, there are many differences between using public transport in a foreign country versus your home country in general. For instance, I don’t have a phone plan in France. I can’t even Google if I’m going in the right direction! And, not even to mention that I took approximately 5 years of French and can only ask a French person “Oú est les toilettes?” with no ability to understand what they say back to me.

Once I decided that the walk to the Melanie tram station from the Chateau de Pourtales was simply ‘too far’—I know very American—I decided to try to bus out. My first attempt had me running to catch a bus that I didn’t realize came even 10 minutes. On my second attempt, I went in a circle, which I only noticed was a circle because of this little coffee shop I tried to order at in French (terribly). And my third attempt I got off the tram and refused to walk an extra 15 minutes back to the Chateau, so I saw the 15 bus and hopped on (Lucky Guess?).

In all actuality, traveling public transport hasn’t been terribly hard. There are just different struggles with it in France than in America for me. I have learned on my phone for help in the past, and now I have tram and bus maps to read… in French. Since I know ‘un peu’ French, my friends often look at me for guidance. Don’t tell them that I said this but, I don’t know what is “droit”. Usually, I go with my gut, my insane directional skills, or the 15 or L1 because L6 leaves Strasbourg—which is all I really need to know.

Hi, I am Lily Dunlop and I study at Georgia College and State Univerisity as a senior English creative writing major and a rhetoric minor. I am currently studying abroad to finish my Leadership Certificate Program and to gain intercultural experience to further my writing. I have loved Strasbourg so far and I have also traveled to London and Ireland because of this program. During this experience, I have enjoyed writing and creating videos about my experiences on my Youtube channel.