Living in a Real-Life Castle

I never guessed I would have the chance to live in a Château. Who gets lucky enough to be able to live in a castle for a month? Seriously who? I didn’t know what to go in expecting. Would it be like what I saw in the movies? Or would it just be like a normal hotel? Well, I got lucky, because as we know the movies tend to lie about most things in life, but the Château looks like it walked right out of one. And I’m not exaggerating, it even has spiral staircases and everything! 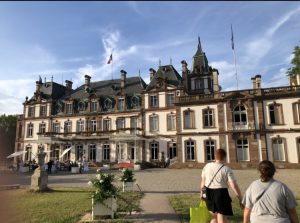 In fact, it’s hard to not think of yourself as a princess from the movies when you wake up to hearing a string quartet practicing their fancy French music in the Salon Rouge as you sip your latte and eat your chocolate croissant in the room next door.

Also, if you are a believer in the supernatural like me, Château de Pourtalès is the place for you. But don’t worry the ghosts seem very friendly! And except for the occasional flickering of the lights or opening or closing of a door, they seem to stick to themselves for the most part. But I can’t lie, it’s still a little bit exciting to know they are here!

Hi, my name’s Angela! I am a current senior at Georgia College and State University, which is in Milledgeville Georgia in the United States. I am studying English with a minor in rhetoric. I also like to write and do social media as well. In addition, I absolutely love to travel! I have done some travel in the States, mainly along the East Coast, but this is my first time out of the country! And I already can’t wait to see more. Life is too short not to see as much of the world as you can!

Blaci has Boundaries
Life in a Château