One of the things that I have appreciated most about living abroad is the extensive and efficient public transportation infrastructure that is available in nearly every major city.  Aside from the occasional strike, France (and their European counterparts) have massive transportation systems of subways, tramways, buses, and more.

Undoubtedly, the evolution of urban life in the United States and Europe has impacted the transportation systems that have been put in place, but as I travel across Europe, the public transportation infrastructure has been a topic of conversation, debate, and interest.

This public transportation system is seen as a public good, one that connects people, cities, and goods to each other.  Thus, the city metro system will often also be accompanied by regional bus and train lines as well as high speed international and long-distance rail.

One of the things I will surely miss upon return to the United States is the freedom and ease of travel within and between cities. Sure, there are some cities in the United States with reliable and extensive public transportation– Washington D.C., New York City (and surrounding metropolis), and Boston– to name a few.  But this number of cities does not nearly compare with the plurality of cities across Europe that have implemented public policies that favor alternative modes of transportation (including public transportation).

As a native of Atlanta, I am familiar with our MARTA (Metropolitan Atlanta Regional Transit Association) system. Our heavy rail services 38 stations and covers 48 miles. The ratio sounds great, but the density doesn’t service quite as well.  As a comparison, Atlanta’s MARTA system has one-stop every 1.27 miles whereas Paris has an average of 2.5 stops per every 1 mile.

Meanwhile, our infrastructure of intercity buses and trains does not nearly compare to that of Europe. The popularity of Eurail (and its’ European counterpart Interrail) among study abroad students and backpackers has definitely demonstrated the ease of traveling via train across countries and cities.  On any given day there may be upwards of 20 different itineraries to travel between countries and cities.  This differs from the US Amtrak that has only a handful of routes between cities on any given day (there are also stark regional differences insofar as connectivity).  Furthermore, Europe’s high-speed trains connect individuals to their destinations quickly. The Eurostar connects Paris and London in only one hour 29 minutes! In comparison, Amtrak connects Boston to New York (the same distance) at the same pace as a car on the highway (just under 4 hours).

Another mode of transportation that is popular in Europe (at least relative to the US) is biking. Amsterdam, of course, is known for its biking culture, but this form of transportation is actually very popular across many European cities.  In the United States, however, biking has only recently become a popular mainstay in urban culture–fit with its own subculture (fixies, anyone?). In Europe, the layout of the city is not only conducive to biking, but also to public transportation and walkability. Biking makes sense when you can use pedestrian streets and don’t own (or need) a vehicle. On the other hand, in most cities in the US, the car still reigns– vehicles and gas are cheaper, drivers are unaccustomed to bikers, dedicated bike paths usually take the shoulder (rather than space on the sidewalk), and people often live farther away from work (density is lower).

Inner-city dwellers have benefited recent additions of bike paths and other modes of transportation (assuming they use them), but as populations continue to sprawl, we build roads, not rail. We continue to follow a development pattern that favors spacious landscapes and necessitates vehicular travel.

Would it be possible to implement extensive transit systems in the United States? 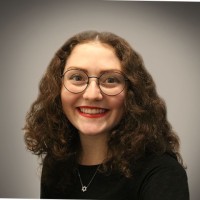 Renee is a study abroad and travel enthusiast. In her spare time, you can find her learning a new skill, practicing German, or exploring a new city! She is an alumna of the European Study Center in Strasbourg and now works in Germany as The CEPA Foundation’s Director of Engagement.

From Slovenia With Love
Small Town… To Big World