Three days into my Study Abroad, I turned 21. In America, 21 is possibly the biggest birthday—one you’ll never forget. When I realized that I would be in Europe when I turned 21, I was excited. My best friend bought me a crown and a little sash to celebrate. However, I didn’t expect that the whole night I would be repeatedly asked when my wedding was! 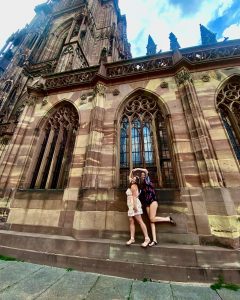 For my birthday, we decided to go to a local bar to celebrate in the typical “I’m turning 21 and I’m also American” fashion. We walked into our first bar and ordered a few drinks. I was surprised when a young man behind me tapped me on the shoulder to congratulate me on my engagement. Did I get engaged and forget about it? I looked over at my friends, who all began to laugh. The French man was confused and began to point at my sash hanging from my shoulders. He then explained that in France, a sash on a young woman means that she is having her Bachelorette party.

As the night went on, many locals continued to buy me drinks. At first, 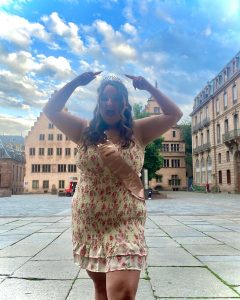 part of me wanted to believe that it was only that one French man who thought it was my Bachelorette party, but with the number of free drinks and everyone staring at my left hand, it was non-negotiable. They continued to say ‘congratulations’, and with each one came another drink. So, to seal the deal my friends began to sing Happy Birthday and each person in the bar decided to sing along. With that, everyone now knew it was not a Bachelorette party and the night only got better.

Hi, I am Lily Dunlop and I study at Georgia College and State Univerisity as a senior English creative writing major and a rhetoric minor. I am currently studying abroad to finish my Leadership Certificate Program and to gain intercultural experience to further my writing. I have loved Strasbourg so far and I have also traveled to London and Ireland because of this program. During this experience, I have enjoyed writing and creating videos about my experiences on my Youtube channel.